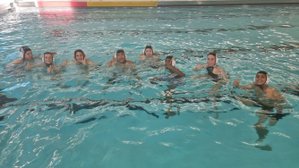 The relatively inexperienced U12's Watford team headed to Chelmsford on Saturday afternoon under the watchful gaze of Head Coach Edi.

This was the third London League tournament of the season and on Saturday evening we had games against Chelmsford, Beckenham and West London Penguins B team.

The first Watford match was against a Chelmsford side that needed to be bolstered with the addition of two 2008 (U15) players as they were short of a full complement. Undeterred, the Watford players stuck to their game plan – tight marking and then quick ball up the wings on the counterattack. This yielded results and they were delighted to first take the lead and then slowly consolidate through the first half. With great goalkeeping from Alex, the defence was expertly marshalled by Yash and despite a late goal from the home side, Watford headed to the side 3-1 up at half time.

Edi was not satisfied though, and some spirited words meant the team lined out for the second half ready to build. Three more goals, all from a prolific Maja, followed - leading to a satisfying 6-1 final score. Goals came from Yash, Keanu and Maja (4).

The second game was a very different affair – matched with a super-strong Beckenham side, characterised by excellent swimming, and featuring some boys who had recently won the ESSA Year 8 Nationals with Trinity School’ It was clearly going to be a case of learning how to organise the defence to cope with stronger faster players. The younger Watford team stuck to their guns admirably and there was some stand out persistence from Dylan and Ben in particular. The team never let their heads go down and were much stronger in the second half, conceding only two goals for a final score of 8 – 0.

The third and final match was supposed to be against Penguins but they did not bring enough players, so Watford were offered a friendly against a composite team again including some older players. Once more they played hard and used the opportunity to practice against stronger opposition. Overall, it was a very promising outing and was a real indicator that the team are starting to work together and move the ball about the pitch effectively. Thank you to Edi for his coaching and to all the parents for bringing the players along.